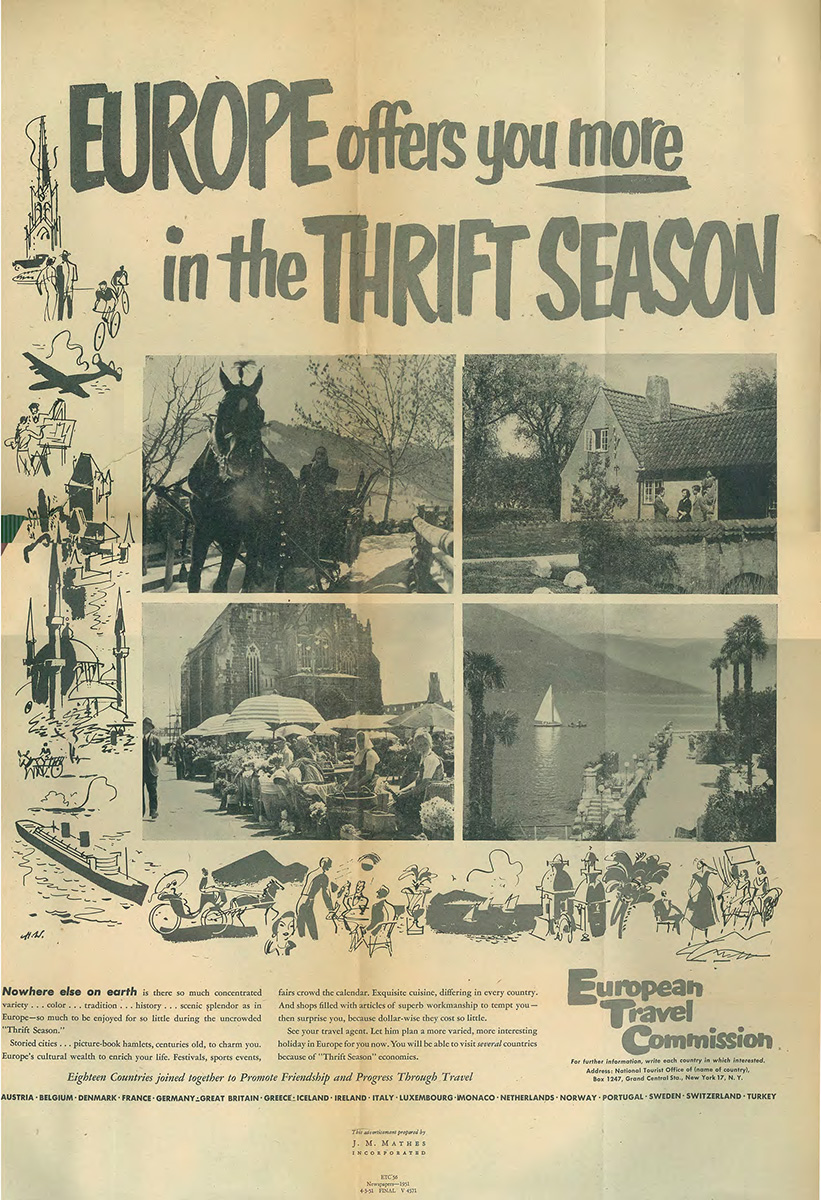 ‘Europe offers you more in the thrift season’, ETC advertisement from 1951.

The interwar years (1918–1939) had witnessed several attempts at European collaboration on tourism matters, but it was not until the end of the Second World War and the founding of the International Union of Official Travel Organisations (IUOTO) in 1948 that real international collaboration to promote tourism took off. The European Travel Commission (ETC) was established in 1948 as a regional commission for Europe under the IUOTO amidst these chaotic, yet also energetic and increasingly optimistic, years of post-war reconstruction in Europe.

From its inception, the ETC sought to facilitate travellers’ mobility, and it remained committed to the liberal ideals at the heart of the Marshall Plan and the Organisation for European Economic Co-operation (OEEC). Key ETC individuals carried out their ETC-related work as national tourist organisation (NTO) or government representatives and also participated in the work of the OEEC Tourism Committee and the IUOTO. When Arthur Haulot, the second ETC president, summed up the ETC achievements in 1951, he stressed the importance of domestic lobbying towards national governments. He also highlighted the ETC’s collaboration with the Marshall Plan institutions, the OEEC, and numerous industry organisations in its efforts to ease mobility and promote tourism. While the ETC had no formal power, it provided an arena where tourism officials and business professionals could meet and collaborate. The organisation connected experts and stakeholders with a shared vision, which they tried to promote in all the arenas where they worked. 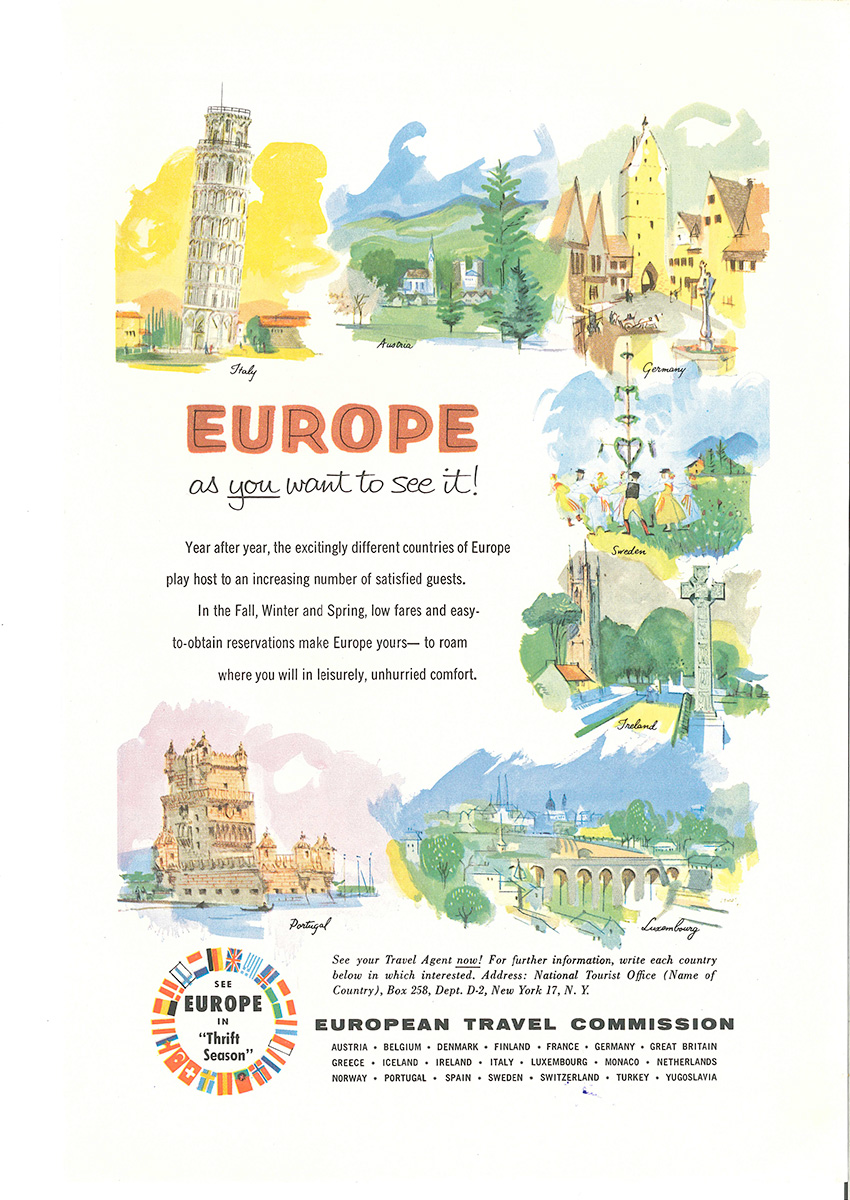 Each year, the ETC and its partners produced high-quality, eye-catching promotional material (brochures, guidebooks, print advertisements, travel shows, window displays, radio broadcasts, television advertising, short films) which branded Europe as a unity destination. While challenging from a financial and organisational perspective, the collective publicity campaign scored significant successes in a context during which pivotal transportation, financial, and technological changes occurred (tourist-class airfares, possibility to travel on credit, the introduction of commercial air jets in the 1950s). The ETC publicity became well-known in the US and undoubtedly sparked interest in Europe among Americans. The growth is noteworthy: between 1949 and 1963, the number of US visitors in Europe grew from approximately 270,000 to 1,117,000. As the ETC broadened its action, the goal of persuading people to visit Europe remained central in the ETC’s mission, and joint publicity campaigns in America took place, from the 1970s onwards, alongside separate actions in other long-haul markets (Japan, Latin America, China).

Arguably one of the greatest successes of the ETC during this early period was its recognition by European and US authorities as a leader in the tourism industry and in the promotion of Europe abroad. Instrumental in this recognition was a trip to Washington, D.C., by the ETC Subcommittee for Publicity in May 1954. 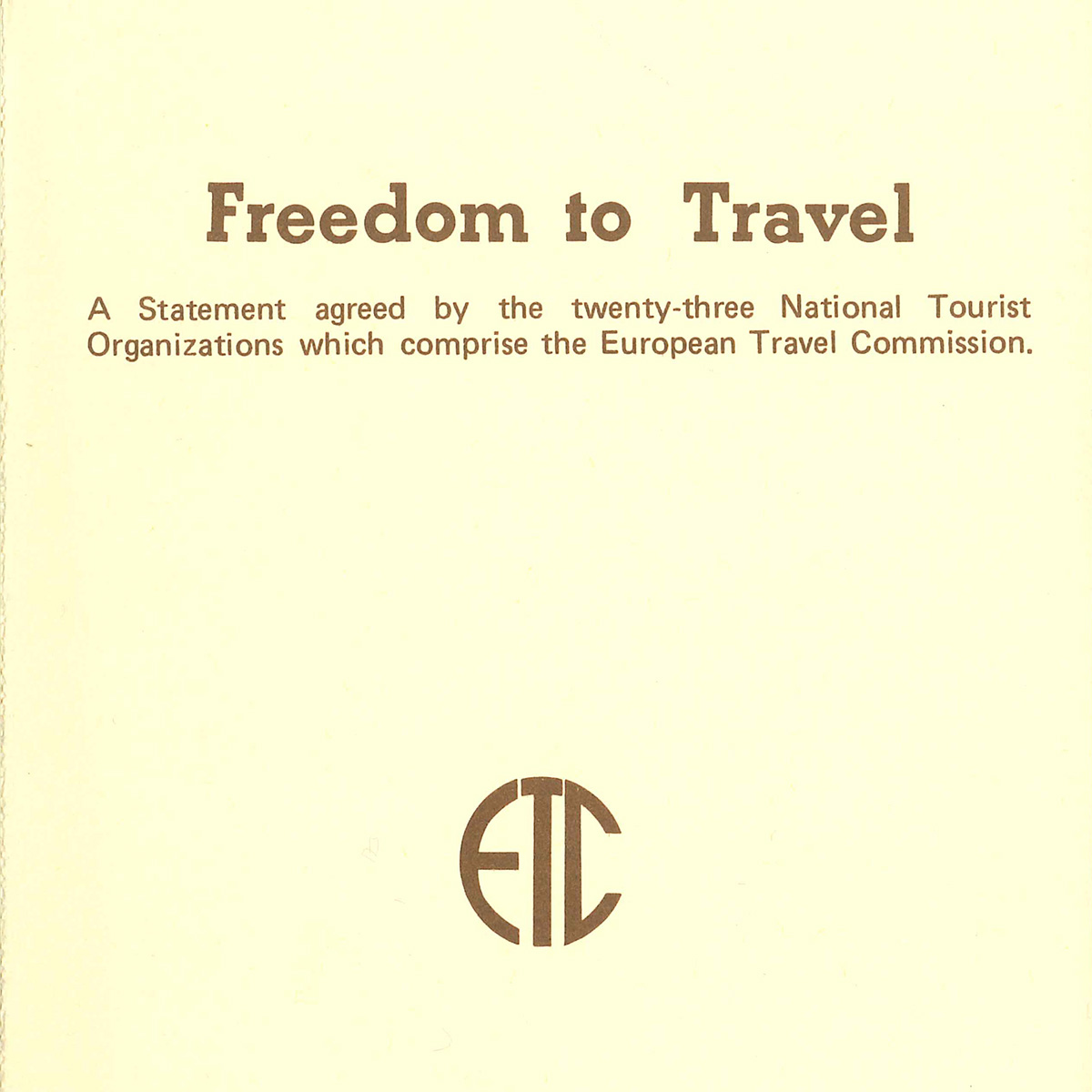 In the 1950s and 1960s beyond its publicity campaigns, the ETC fruitfully collaborated with other international organisations. It acted, for instance, as technical adviser in the OEEC/OECD Tourism Committee and worked with the Inland Transport Committee of the Economic Commission for Europe to deal with transport infrastructure development in support of tourism. In all these activities, the overriding aim of the ETC was to make passing national borders easier through the reduction or abolishment of visas and other frontier formalities. This work culminated in the 1963 United Nations Conference on International Travel and Tourism, in which ETC key individuals played a major role. In 1956, the ETC also became independent from the IUOTO. The latter created a new Regional Travel Commission for Europe, which included both Western and Eastern European countries.

The ETC also called for more coherence in tourism policy formulation in Europe. To this end, the ETC published, in 1956, a White Paper on a Tourist Policy in Europe. Policy coordination came sometimes at moments of distress, for example during the ad hoc actions dealing with the negative effects on travel following the Suez Crisis in 1956. Such crisis situations aside, the ETC called for tourism policies to stimulate the growth of the tourism sector, and to better spread visitors over the year and over the continent by developing new itineraries. Willing to act as a liaison for the various organisations active in the field, the ETC further developed research activities in support of these aims. For instance, the ETC led surveys and research to better understand American travellers’ preferences.

In the 1960s the ETC also launched the idea of regular conferences for professionals. The first Transatlantic Travel Congress took place in New York in 1966 and became a recurring annual event. Underlining the transatlantic bonds was important because President Lyndon B. Johnson suggested in 1968 that the US could impose restrictions on foreign travel. The ETC quickly responded with a declaration on the freedom to travel, above all identifying the freedom to travel as a basic human right, to be enjoyed without restriction or discrimination. 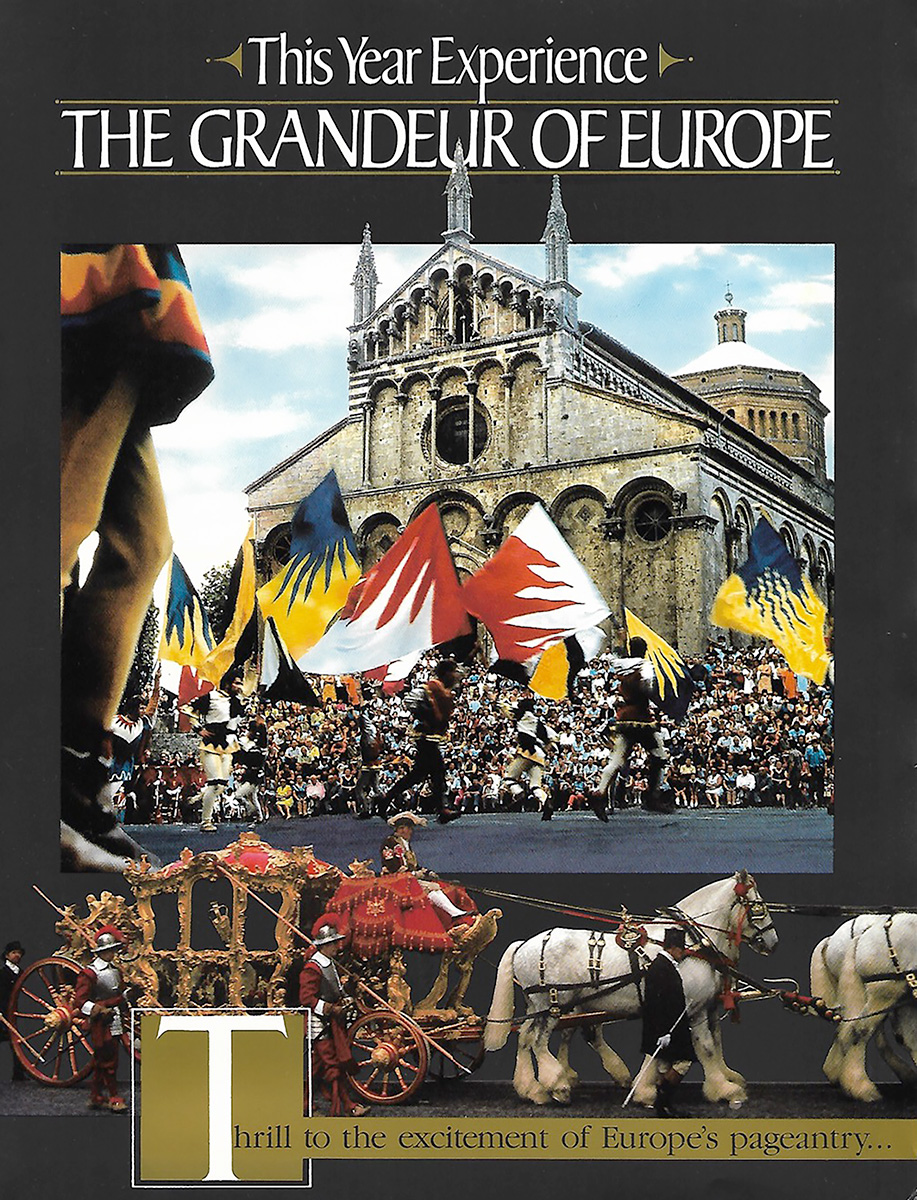 Cover Page of ‘This Year Experience The Grandeur of Europe’ brochure from 1986.

Unlocking Potential, Weathering the Storms: From a Transatlantic to a Global Player
(1968 – 1989)

The 1970s started with the expansion of the ETC: newly independent Malta and Cyprus joined the organisation in 1971 and 1973 respectively, and the ETC branched out into new activities. It started an active engagement with the work of Europa Nostra in the preservation of cultural heritage as a tourism asset. The memberships and activities were managed through a leaner organisational structure, a permanent secretariat located in Europe, and an affiliate office in New York as a liaison with the Donald N. Martin Company.

In its work, the ETC continued its research-based readying of its members for new opportunities and bracing them for challenges. It kick-started discussions on new technological developments, such as the introduction of new aircrafts in the 1970s that could lower the cost and thus drastically increase transatlantic travel, and tracked the modest start of computer-based technologies in the early 1980s. The ETC also sought to help members deal with the shockwaves sent through the tourist landscape by terrorist attacks, or the 1986 Chernobyl nuclear accident, and kept track of the economic woes of the 1970s and 1980s.

The 1986 fall programme on the American market brought together the European Economic Community (EEC) and the ETC with the aim to boost the number of visitors in Europe. Such a collaboration was another concrete way in which the organisation contributed to the attenuation of a dip in numbers of visitors coming to Europe in the mid-1980s. Diversification of the long-distance markets in which the ETC operated was a further strategy to grasp opportunities and become less susceptible to crisis. Within the United States, the ETC’s original target market and certainly the main one until the 1980s, the ETC embarked on a modest expansion from its north-eastern base to the mid-west and the Sunbelt. Simultaneously, the ETC also decisively moved beyond the United States and set up operations in Japan, Latin America, Australia, and Canada. 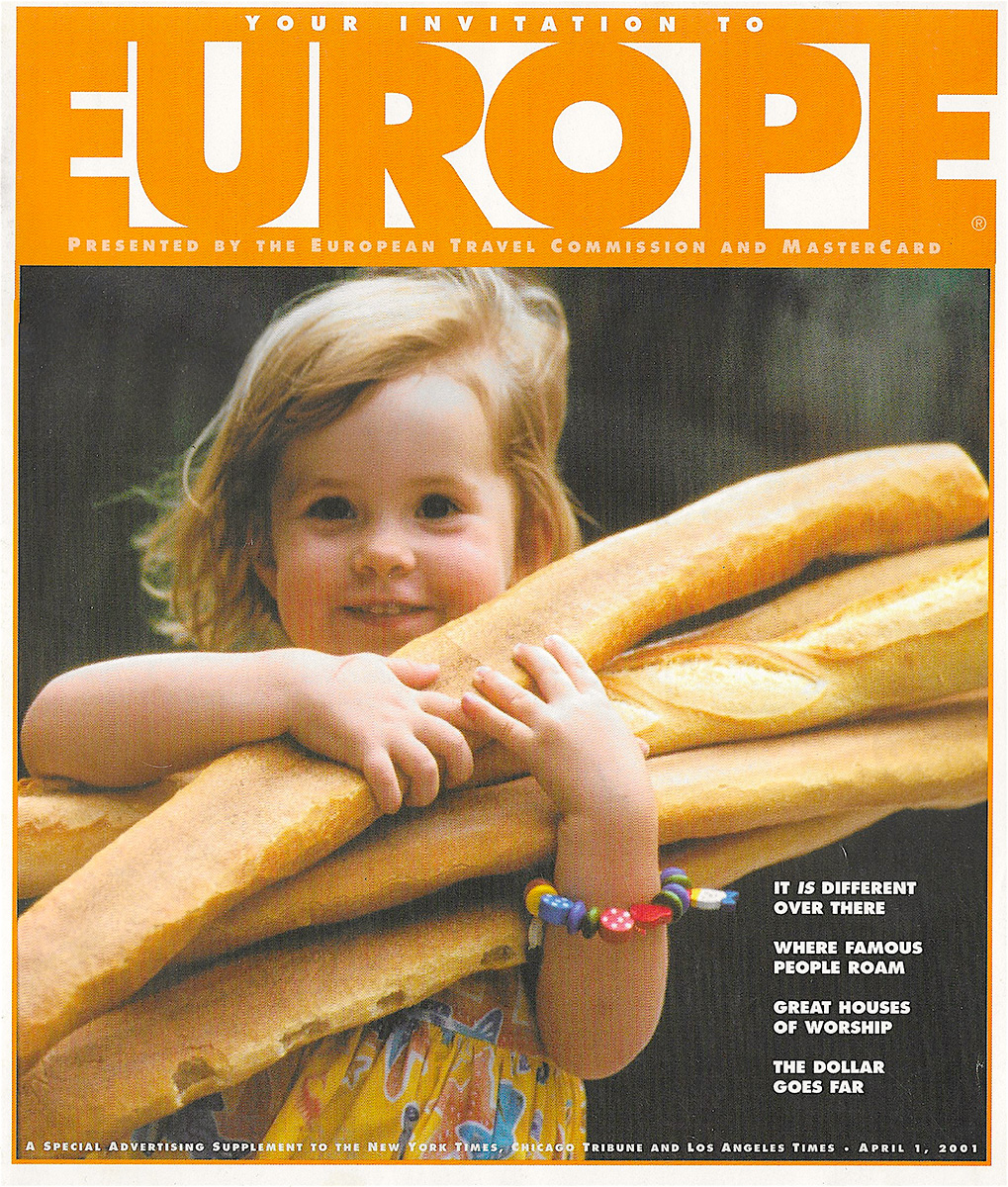 Cover page of ‘Your invitation to Europe’ magazine from 2001.

The fall of the Berlin Wall in 1989 was a very consequential event for the promotion of Europe as a tourist destination. It was instantly the icing on the cake for 1990 as the European Tourism Year. This same year the ETC admitted Hungary as a new member, and the most significant wave of new memberships since its creation in 1948 followed.

The last decade of the twentieth century and the first decade of the twenty-first century were characterised by two major developments. First, the European Economic Community (EEC) became the European Union in the early 1990s and expanded its tasks and membership. The increased weight of the EU was instrumental in the ETC’s return to Brussels and much closer ties between them followed. The ETC continued its quest to get tourism accepted as an important sector of the European economy with a concomitant policy mandate and financial resources. The ultimate goal was ultimately reached in 2009 in the Treaty of Lisbon, with the creation of a firm mandate in tourism policy for the EU. The second major development was the continuation and dramatic expansion of the digital age. The ETC and the member NTOs were seeking to exploit the digital opportunities that presented themselves, but the new conditions were challenging as well. Initially based on the paper guide Planning Your Trip to Europe, the website www.visiteurope.com was, however, improved, and the ETC increasingly attuned itself to the digital world. It is noteworthy that the European Commission co-funded several of these World Wide Web ventures.

The organisation morphed from an island kingdom of semi-autonomous units to a more centralised organisation in which an enlarged Executive Unit could have more oversight and provide clearer support for decision-making. In terms of its membership, the organisation grew further in the direction of the private sector, for which an associate membership was set up. Companies active in IT for the travel industry, transportation, travel agents, tax refund, and value retail have since joined the ETC. With consent of a majority of its members and in line with the opportunities offered by its location in Brussels, the ETC once again became officially active in advocacy, as it had done at its creation.

The last five years further fortified the two larger trends that had already characterised the ETC’s situation around the turn from the twentieth to the twenty-first century. The ties with the European Union became much more significant, and financially important. With the support of the European Commission, the ETC could embark on the full revamping of the website to attract travellers. The contents changed towards a much stronger focus on pan-European themes and itineraries, in line with the ambitions with which the organisation was set up in 1948. As it has done throughout the numerous political and cultural shifts of the past 70 years, the organisation is looking toward the future and preparing Europe for the benefits and challenges of tourism in the twenty-first century.