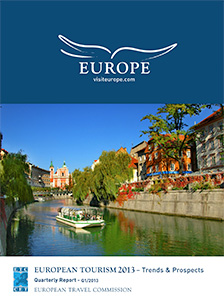 International arrivals and nights to Europe for the first months of 2013 point to a slower, but continued growth for most of the reporting destinations. Key indicators from the aviation and accommodation industries confirm the trend. Air transport indicators confirm that tourism demand remains robust from long-haul markets, with travel on European routes growing even at a slightly faster rate moving into
2013. Occupancy in European hotels has also been higher than a year earlier, with growth apparent in all sub-regions.