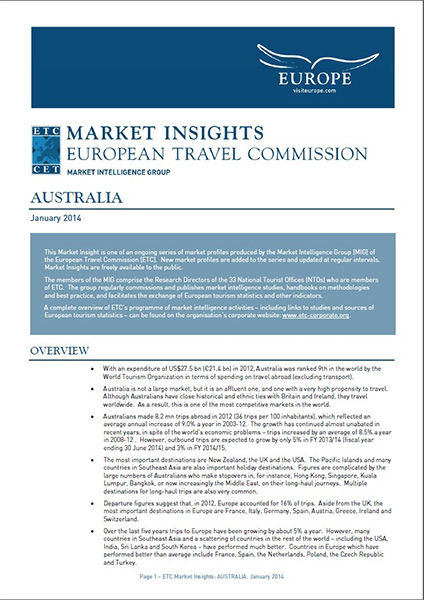 With an expenditure of $27.5 bn (EUR 21.4 bn) in 2012, Australia was ranked 9th in the world by the World Tourism Organizations in terms of spending on travel abroad (excluding transport).

Australia is not a large market, but is an affluent one, one with a very high propensity to travel. Although Australians have close historical and ethnic ties with Britain and Ireland, they travel worldwide. As a result, this is one of the most competitive markets in the world.

The most important destinations are New Zealand, the UK and the USA. The Pacific Islands and many countries in Southeast Asia are also important holiday destinations. Figures are complicated by the large numbers of Australians who make stopovers in, for instance, Hong Kong, Singapore, Kuala Lumpur, Bangkok, or now increasingly the Middle East, or in their long-haul journeys. Multiple destinations for long-haul trips are also very common.

Departure figures suggest that, in 2012, Europe accounted for 16% of trips. Aside from the UK, the most important destinations in Europe are France, Italy, Germany, Spain, Austria, Greece, Ireland and Switzerland.

Over the last five years trips to Europe have been growing by about 5% a year. However, many countries in Southeast Asia and a scattering of countries in the rest of the world – including the USA, India, Sri Lanka and South Korea – have performed much better. Countries in Europe which have performed better than average include France, Spain, the Netherlands, Poland, the Czech Republic and Turkey.