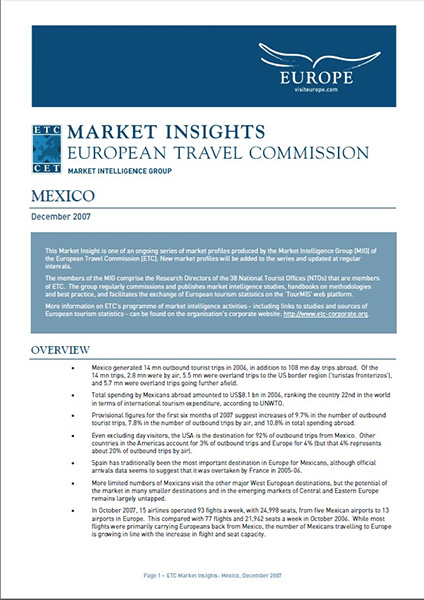 Total spending by Mexicans abroad amounted to US$7.3 bn in 2010, ranking the country 32nd in the world in terms of international tourism expenditure, according to UNWTO.

Spain has traditionally been the most important destination in Europe for Mexicans.

In December 2010, 11 airlines operated 79 flights a week, with 21,451 seats, from two Mexican airports to 7 airports in Europe. This compared with 93 flights and 24,998 seats a week in October 2007. While most flights were primarily carrying Europeans back from Mexico, the number of Mexicans travelling to Europe is growing in line with the increase in flight and seat capacity.

We use cookies and Inspectlet to ensure that we give you the best experience on our website. If you continue to use this site we will assume that you are happy with it.OK