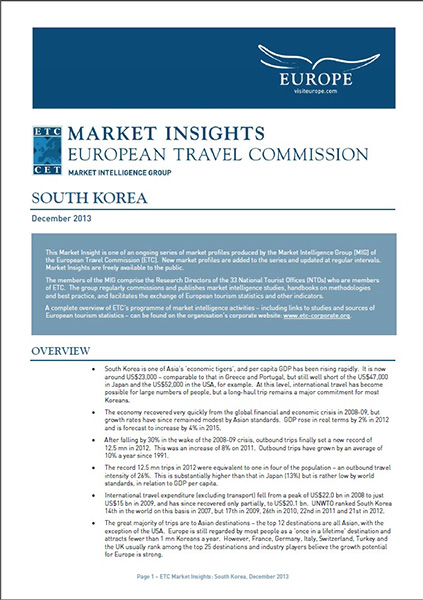 South Korea is one of Asia’s ‘economic tigers’, and per capita GDP has been rising rapidly. It is now around US$23,000 – comparable to that in Greece and Portugal, but still well short of the US$47,000 in Japan and the US$ 52,000 in the USA, for example. At this level, international travel has become possible for large numbers of people, but a long-haul trip remains a major commitment for most Koreans.

The economy recovered very quickly from the global financial and economic crisis in 2008-09, but growth rates have since remained modest by Asian standards. GDP rose in real terms by 2% in 2012 and is forecast to increase by 4% in 2015.

The record 12.5 million trips in 2012 were equivalent to one in four of the population – an outbound travel intensity of 26%. This is substantially higher than that in Japan (13%) but is rather low by world standards, in relation to GDP per capita.

The great majority of trips are to Asian destinations – the top 12 destinations are all Asian, with the exception of the USA. Europe is still regarded by most people as a ‘once in a lifetime’ destination and attracts fewer than 1mn Koreans a year. However, France, Germany, Italy, Switzerland, Turkey and the UK usually rank among the top 25 destinations and industry players believe the growth potential for Europe is strong.