In total, 35 European destinations including a number of National Tourism Organisations in Europe joined forces to promote Europe as a tourism destination in China. Each destination involved in the campaign was assigned to one of the thematic clusters.

The first phase of the campaign focused on informing Chinese FITs about the thematic clusters and related destinations, reassuring them about travel to Europe when the time is right. It included series of posts, ads and videos published on the official channels of the campaign. In this first phase, several communication channels were utilized, including Weibo, WeChat, Douyin and Mafengwo. Additionally, the mini program WeChat Travel Experience presented points of interest of each destination in detail, allowing the Chinese audience to personalize and dream about their next trip to Europe. Between September 2020 and February 2021, over 2,000 campaign posts were published with an average of 130 posts per destination involved in the campaign. The campaign reached over 217 million page views, averaging 40 million page views per destinations. Over 82,000 instances of interaction were recorded. 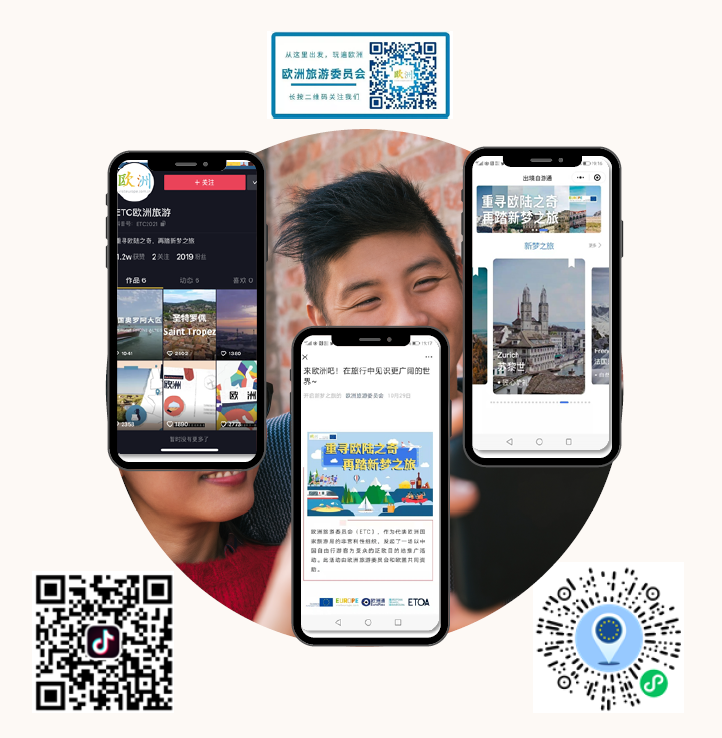 Between January and March 2021, the second phase of the promotional campaign was kicked off. A team of 15 Chinese KOLs living in Europe with a combined follower base of 30 million, was appointed to further promote the 5 thematic clusters through an influencer challenge. By the beginning of March, the KOL activation reached almost 9 million page views and over 45,000 interactions. Nearly 10,000 users voted in the influencer challenge, expressing their interest for one of the 5 themes. Four users will have the opportunity to win a trip to Europe focused on their favorite thematic cluster. Mr. Zhu Zhengting, a young Chinese star with over 23 millions followers on Weibo promoted the campaign through 4 inspirational videos. The shooting of the videos took place in mid-February 2021.

The campaign had a dedicated landing page and hashtag on the Weibo Travel platform. Thanks to the Weibo partnership, the campaign earned 140 million views landing page views, nearly 5 million video views and  almost 40,000 discussions. More than 60 Chinese KOLs participated in the campaign creating original posts to promote Europe.  Additionally, Chinese Online Travel Agency Tuniu supported the campaign initiative by joining as a global sponsor and sharing content on the campaign partners.

As part of the campaign, a TV report highlighting each destination’s link to China was broadcasted on the DouYin account of Anhui TV and further promoted by Chinese KOLs. The Anhui TV KOL activation gathered over 20 million page views and over 16 000 interactions.