Europe welcomed 671 million international tourist arrivals in 2017, an outstanding 8% growth compared to 2016 (+2%) . Europe has consolidated, for the eight consecutive year, its position as the leading destination worldwide.

According to the latest European Travel Commission’s “European Tourism 2017–Trends & Prospects”, regional expansion was supported by the economic growth in major source markets and the recovery of destinations previously affected by security concerns. Almost all monitored destinations saw increases in tourist arrivals with more than a half growing in excess of 10%.

“The upturn in the global economy paves the way to reorient European and national policy to support the drivers of tourism growth, promote long-term sustainable development and be a more effective catalyst for job creation in Europe.” said Eduardo Santander, Executive Director of ETC.

Growth from the UK largely continued despite a weakened Pound with several destinations posting double-digit increases. France and Germany continued to be a source of notable arrivals growth for several European destinations aided by encouraging economic conditions that support private consumption.

Russian outbound travel has picked up following years of declines. All but one reporting destinations enjoyed a strong rebound in arrivals from this market. Despite some recent softening, a stronger US dollar and competitive air fares contributed to growth in tourist arrivals from the US, up +12% in 2017 compared to 2016. In China improved air connectivity and its expanding middle class continue to drive travel demand. In 2017, Europe saw a remarkable 16% increase from China, compared to the flat growth in 2016. 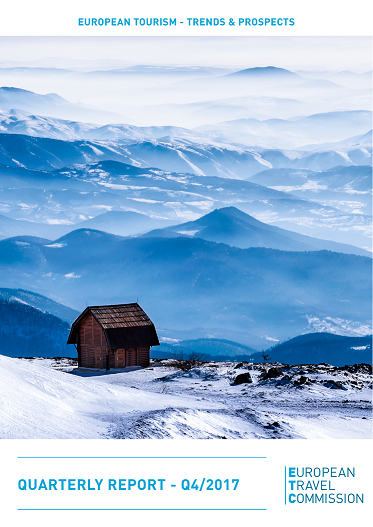