Brussels, 17th November 2016, International tourist arrivals to Europe grew by 3% in the first half of the year compared to the same period last year. European tourism continues its positive trend and shows exceptional resilience to geopolitical and safety and security challenges.

According to the European Travel Commission’s latest report, “European Tourism – Trends & Prospects”, the majority of destinations featured an outstanding performance in visitor numbers over the summer period. Fastest growth was recorded by Iceland (+34%), driven by both short and long-haul markets, followed by Slovakia and Cyprus (both +19%), the latter benefiting from deferred Russian travel typically bound for Turkey. Standout growth destinations were also, Bulgaria (+13%), Ireland and Portugal (both +12%). Off the beaten track destinations in Central and Eastern Europe such as Serbia, Slovenia, Lithuania, and Romania (all +10%) are the focus of bargain hunters and owe their success to on-going marketing efforts. On the other hand, Belgium (-13%) and Turkey (-32%) are still at low ebb this year, struggling to get back to past growth levels.

Although a weaker Sterling against the Euro has made travel abroad more expensive for Britons, they continue to travel as several destinations posted double-digit growth from the UK so far in 2016. A strong US Dollar and competitive air fares trump terrorism fears with most destinations seeing encouraging visitor arrivals from the US. Year-to-date data points at a 6% increase in US visitors compared to the same period last year. European destinations slowly rebound from a long period of weakness in tourist flows from Russia. Although year-to-date data exhibits a 4.5% decline in Russian arrivals to Europe, resulting from the country’s staggering economy, in the longer run an estimated 8% annual average growth is forecasted by 2020. Despite uncertainty of safety and security fears dissuading Chinese travel to Europe, China continues to be a source of huge arrivals growth for many European destinations, partly due to the country’s expanding middle classes.

“To foster Europe’s competitiveness and achieve a better promotion of the region as a tourism destination, European authorities should capitalise on attracting investment from public and private stakeholders to increase tourists flows to Europe, especially from third markets”, said Eduardo Santander, Executive Director of the European Travel Commission. 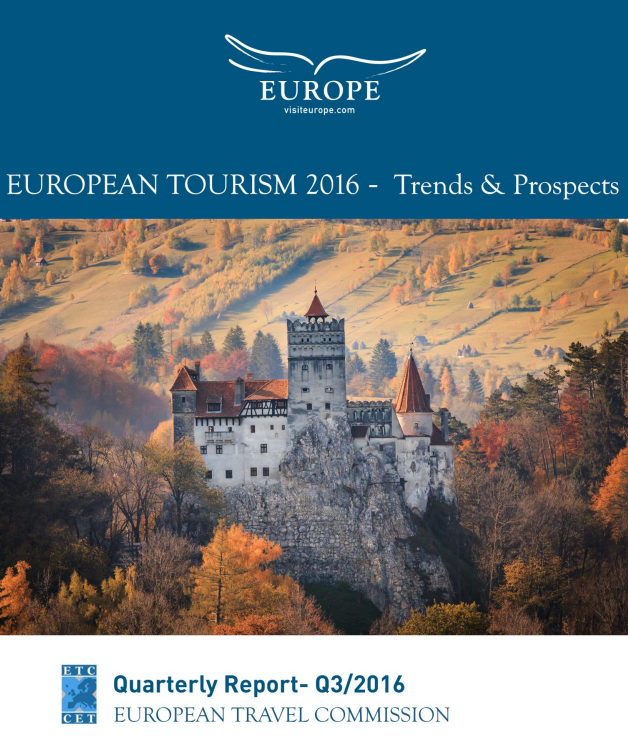