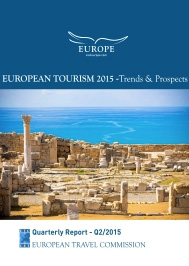 European tourism growth remains solid at the beginning of the year confirming the continued positive performance of European destinations. Positive results before the summer period are driven by increased demand from both intra-regional and overseas markets. These results confirm the sustained upward trend estimated for 2015 and proves the on-going efforts of destinations to fight seasonality.The vast majority of reporting ETC destinations record increased numbers of international tourists arriving in the first five months compared to the same period last year.

We use cookies and Inspectlet to ensure that we give you the best experience on our website. If you continue to use this site we will assume that you are happy with it.OK