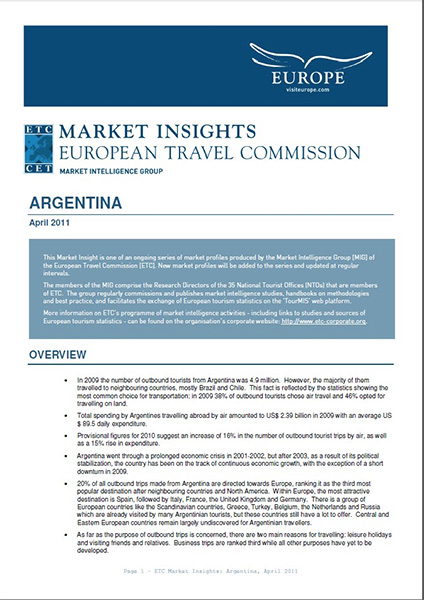 In 2009 the number of outbound tourists from Argentina was 4.9 million. However, the majority of them travelled to neighbouring countries, mostly Brazil and Chile. This fact is reflected by the statistics showing the most common choice for transportation: in 2009 38% of outbound tourists chose air travel and 46% opted for travelling on land.

Total spending by Argentines travelling abroad by air amounted to US$ 2.39 billion in 2009 with an average US $ 89.5 daily expenditure. Provisional figures for 2010 suggest an increase of 16% in the number of outbound tourist trips by air, as well as a 15% rise in expenditure.

Argentina went through a prolonged economic crisis in 2001-2002, but after 2003, as a result of its political stabilization, the country has been on the track of continuous economic growth, with the exception of a short downturn in 2009.

20% of all outbound trips made from Argentina are directed towards Europe, ranking it as the third most popular destination after neighbouring countries and North America. Within Europe, the most attractive destination is Spain, followed by Italy, France, the United Kingdom and Germany. There is a group of European countries like the Scandinavian countries, Greece, Turkey, Belgium, the Netherlands and Russia
which are already visited by many Argentinian tourists, but these countries still have a lot to offer. Central and Eastern European countries remain largely undiscovered for Argentinian travellers.

As far as the purpose of outbound trips is concerned, there are two main reasons for travelling: leisure holidays and visiting friends