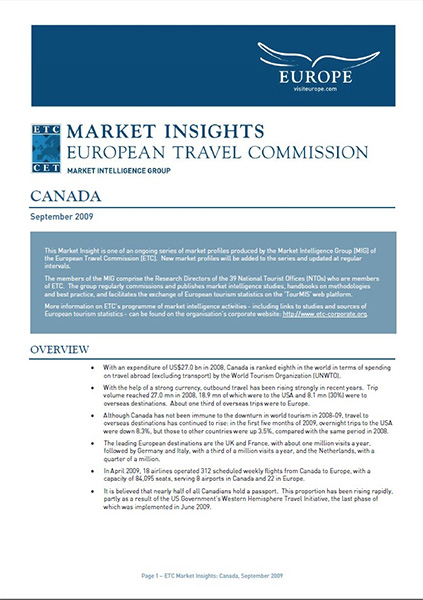 With an expenditure of US$ 27.0 bn in 2008, Canada is ranked eight in the world in terms of spending on travel abroad (excluding transport) by the World Tourism Organization (UNWTO).

With the help of a strong currency, outbound travel has been rising strongly in recent years. Trip volume reached 27.0 mn in 2008, 18.9 mn of which were to the USA and 8.1 mn (30%) were to overseas destinations. About one third of overseas trips were to Europe.

Although Canada has not been immune to the downturn in world tourism in 2008-09, travel to overseas destinations has continued to rise: in the first five months of 2009, overnights trips to the USA were down 8.3%, but those to other countries were up 3.5%, compared to the same period in 2008.

In April 2009, 18 airlines operated 312 weekly scheduled weekly flights from Canada to Europe, with a capacity of 48,095 seats, serving 8 airports in Canada and 22 in Europe.

It is believed that nearly half of all Canadians hold a passport. The proportion has been rising rapidly, partly as a result of the US Government’s Western Hemisphere Travel Initiative, the last phase of which was implemented in June 2009.