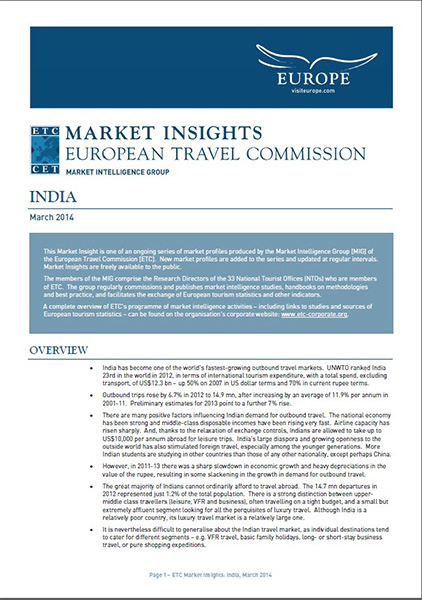 India has become one of the world’s fastest-growing outbound travel markets. UNWTO ranked India 23rd in the world in 2012, in terms of international tourism expenditure, with a total spend, excluding transport, of US$ 12.3bn – up 50% on 2007 in US dollar terms and 70% in current rupee terms.

There are many positive factors influencing Indian demand for outbound travel. The national economy has been strong and middle-class disposable incomes have been rising very fast. Airline capacity has risen sharply. And, thanks to the relaxation of exchange controls, Indians are allowed to take up to US$ 10,000 per annum abroad for leisure trips. India’s large diaspora and growing openness to the outside world has also stimulated foreign travel, especially among the younger generations. More Indian students are studying in other countries than those of any other nationality, except perhaps China.

However, in 2011-13 there was a sharp slowdown in economic growth and heavy depreciation in the value of rupee, resulting in some slackening in the growth in demand for outbound travel.

The great majority of Indians cannot ordinarily afford to travel abroad. The 14.7 mn departures in 2012 represented just 1.2% of the total population. There is a strong distinction between upper-middle class travellers (leisure, VFR and business), often travelling on a tight budget, and a small but extremely affluent segment looking for all the perquisites of luxury travel. Although India is a relatively poor country, its luxury travel market is a relatively large one.