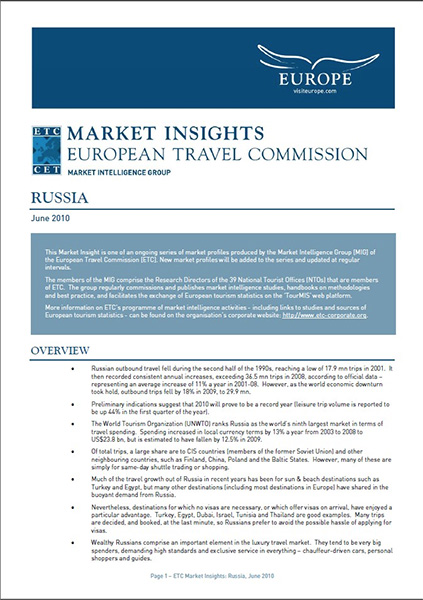 Preliminary indications suggest that 2010 will prove to be a record year (leisure trip volume is reported to be up 44% in the first quarter of the year).

The World Tourism Organization (UNWTO) ranks Russia as the world’s ninth largest market in terms of travel spending. Spending increased in local currency terms by 13% a year from 2003 to 2008 to US$23.8 bn, but is estimated to have fallen by 12.5% in 2009.

Of total trips, a large share are to CIS countries (members of the former Soviet Union) and other neighbouring countries, such as Finland, China, Poland and the Baltic States. However, many of these are simply for same-day shuttle trading or shopping.

Much of the travel growth out of Russia in recent years has been for sun & beach destinations such as Turkey and Egypt, but many other destinations (including most destinations in Europe) have shared in the buoyant demand from Russia.

Nevertheless, destinations for which no visas are necessary, or which offer visas on arrival, have enjoyed a particular advantage. Turkey, Egypt, Dubai, Israel, Tunisia and Thailand are good examples. Many trips are decided, and booked, at the last minute, so Russians prefer to avoid the possible hassle of applying for visas.

Wealthy Russians comprise an important element in the luxury travel market. They tend to be very big spenders, demanding high standards and exclusive service in everything – chauffeur-driven cars, personal shoppers and guides.