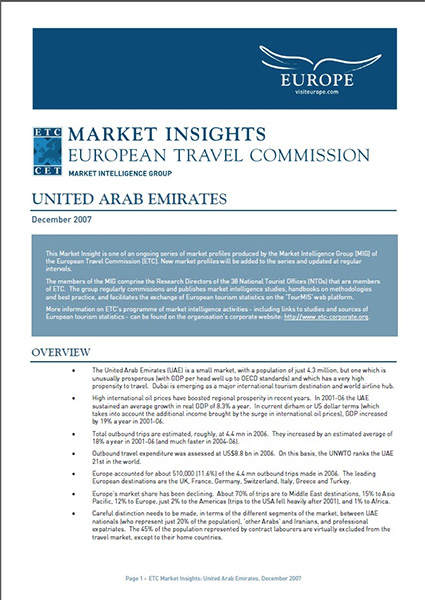 The United Arab Emirates (UAE) is a small market, with a population of just 4.3 million, but one that is unusually prosperous (with GDP per head well up to OECD standards) and which has a very high propensity to travel. Dubai is emerging as a major international tourism destination and world airline hub.

Outbound travel expenditure was assessed at US$8.8 bn in 2006. On this basis, the UNWTO ranks the UAE 21st in the world.

Europe accounted for about 510,000 (11.6%) of the 4.4 mn outbound trips made in 2006. The leading European destinations are the UK, France, Germany, Switzerland, Italy, Greece and Turkey.

Europe’s market share has been declining. About 70% of trips are to Middle East destinations, 15% to Asia Pacific, 12% to Europe, just 2% to the Americas (trips to the US fell heavily after 2001), and 1% to Africa.

Careful distinction needs to be made, in terms of the different segments of the market, between UAE nationals (who represent just 20% of the population), ‘other Arabs’ and Iranians, and professional expatriates. The 45% of the population represented by contract labourers are virtually excluded from the travel market, except to their home countries.